Some thoughts on open notation and late-stage collaboration

Anyone who’s followed this blog (or anyone in the wake of my tirade of shameless self-promotion over the last couple of weeks) will probably be aware that my newest work, Personal Space, receives its premiere this weekend. As you might imagine, the gears have been stepping-up as ‘the big day’ approaches and now we’re in the full throws of final preparations.

Two important things have come out of the final leg of this particular journey – things I will almost certainly have cause to expand on in the future. More than that, these are things I knew from the start would be significant, just not in the way they turned out to be. And I feel much richer for the experience.


What am I talking about? First, the very structure of the commission itself. Owing to the number of people involved, timetabling issues and matters of space, there was always a persistent threat of a ‘hand-me-down’ process of collaboration. The project involves me as composer, Elena Hull as performer and a team of four designers from Central Saint Martins (Elisa Nader, Rose Elliot-Dancs, Andrew Chaplin and Rosemary Millbank). I live nowhere near Elena and it took a while for us to be put together to start with (finding solo bassists who are free when you need them can’t be easy). That would make a ‘normal’ composer-performer collaboration awkward enough. Then consider that the design students didn’t begin their university year until a couple of months after I was awarded the commission. It doesn’t stop there. This is the first time the students have worked on a project of this kind… and there are loads of students involved (in the overall 'Hidden' scheme). So, the London Sinfonietta and Central Saint Martins helpfully ran introductory sessions, trial projects, etc. It wasn’t until a few weeks ago that teams of designers were assigned to composers and performers. The new music was supposed to be completed by then. Interspersed among all this was the job of trying to find the right space for the performance to take place, which involved trips to the Southbank Centre and numerous conversations about acoustics and the like. In short, there was a real risk of a particular type of non-collaborative collaboration: I write whatever I feel like, pass it on to a performer who simply has to learn what I’ve scribbled down, the outcome of which is then given to a design team who append whatever they feel like in a rushed response to music completely new to them. I didn’t really want to work like this, and I’m sure the Sinfonietta wouldn’t be keen on the result if that’s what it had all boiled down to.

I resolved to go about composing a piece that would remain receptive to change and adaptation throughout the process of staging the premiere and in subsequent performances. I wanted something interactive. This way – so I reasoned – everyone involved in the initial outing could easily access the core performance idea and bring their own skills and motivations to the table once their turn to be involved came around. For me this meant dealing with a big notational problem right from the beginning: how could I write something so open but maintain an idea clear enough that it could unify the process we would all end up going through? In hindsight, I didn’t do this too well to start with.

Fast forward to the end of last week. I received an email telling me the venue for the performance had changed and that the designers were thinking of using lots of different kinds of organic matter as part of their installation design. I began to worry at this point. Was the process about to spin out of control? Was the idea of collaboration going to be lost? Immediately I wondered how the acoustic was going to be affected, how the new venue’s low ceiling would come into play and so on. I was due to see the work the following Tuesday (yesterday) – only five days before the performance. I may have panicked a little. I needn’t have worried.

What I’ve learned about open notation

When our team of six was first thrown together I discovered two things: that the notational process I'd settled on was not the most suitable and that not everyone treats open notation in the same way. I’m lucky to have been surrounded by people in the past who are very familiar with open notation and who take an extremely dynamic approach to working with it. Elena is a fantastic bass player, but it became apparent that I hadn't communicated my ideas well enough for her to grasp them properly. By her own admission Elena is used to more traditional forms of notation. Don’t get me wrong, this is not a weakness of hers in any way. Quite the opposite – the huge questions left by the notation (questions that weren’t supposed to be there) were a weakness of the notation itself. Elena, however, saw it quite differently to the way I saw it. She suggested that the score I'd provided made for an excellent instruction manual – a guide to another score that could be much more graphic and much less constrained by detail. This was a fantastic point. And so I came up with my first two-score work. The final version now has the initial ‘instruction’ score and a graphic prompt score. Either can be used for performance depending on the needs and desires of the performer. The ‘instruction’ score is essentially an elaborate series of performance directions, albeit one that could be used as a performance score in its own right if that’s what the performer prefers.

The idea of providing two scores, each open in their own way, and each able to act on each other in the interpretative process, is not one I had ever considered before. And here I am, considering how many places I could take this in the future. I think the idea has huge potential.

What I’ve learned about late-stage collaboration

Perhaps my greatest concern with the whole project was the involvement of the designers. They were due to arrive so late in the process, they had no experience working with this kind of performance (or with contemporary music) and their work would be assessed as part of their degrees. That’s a lot of pressure. They also get to work much more intensively on their contribution – they’re all in the same place and surrounded by the facilities they need every day! I, sadly, have to go to work and think about other things a lot of the time (moving to a new town, finding a new home, starting a new job and going through a break-up in this time didn't help matters for me either). Fitting the design part of the puzzle into the overall project was always going to be relatively last-minute and the thing most likely to ‘break’ the process of collaboration.

I couldn't have ended up working with a lovelier group of people. They’re very receptive to other people's ideas and very willing to explore their own openly. They don’t vie for dominance among themselves, and they're very sensitive to the musical component of the performance (rather than just slapping whatever they want on the top of mine and Elena’s work). My concerns about the use of organic matter and the acoustic ramifications turned out to be right on the money, but also completely unfounded. 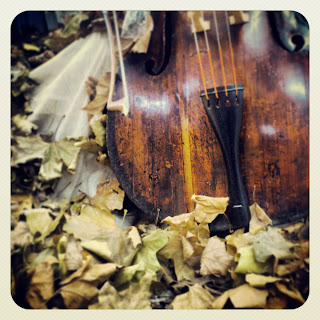 I won’t spoil the surprise for anyone coming to Sunday’s performance (there are some clues in the photo above!). Let’s just say that the design process involves tailoring, caramelising, litter-picking, visits to pet shops, scientific equipment, countless visits to London’s parks and a lot of mess. The upshot is that the installation is potentially quite noisy. This is not something I'd envisaged at all. However, the noisiness adds a dimension to the performance I'd never even considered. The designers took on board the ideas I’ve tried to foster as the heart of the performance: intimacy, exploration and human interaction. What they’ve done is added a sound component to the audience side of the performer-audience relationship. There's now a new kind of interaction in the performance, one that both threatens and entices. This is a development I’d never even thought of. And I dare say it wouldn't have materialised in quite the magical way it has if we’d all been collaborating fully from the outset. It turns out that late-stage collaboration can be as exciting and productive as it can be frightening.

All we need to do now is bring together all that we’ve developed and discovered to produce a unique experience. The Waterloo Sunset Pavilion will never have seen a sunset quite like this one.

Personal Space will be premiered at the Queen Elizabeth Hall, London, on Sunday 8 December 2013. It has been commissioned by the London Sinfonietta as part of Writing the Future, which is generously supported by The Boltini Trust Anthony Mackintosh and Michael & Patricia MacLaren-Turner. Tickets are available here.