Notation and Scoring Ideas (or: Dealing with One-‘Note’ Music)

My compositional approach has shifted in recent years. I use increasing amounts of open notation, open instrumentation and other such things now, which has given me cause to question what certain facets of music-making mean to me; chiefly the score, notation in general, approaches to performance, my relationship with performers, the whole business of rendering ideas, and so on. A short while ago I noticed a call for works with an unusual slant: the music had to be short and for one note only. The idea captivated me (in spite of my personal resolution not to write new works for open calls and competitions any more… ah well). On one hand the idea of music for one note is extremely limiting, but on the other it draws attention to the sheer potential within the concept of a single ‘note’. Undoubtedly, this has a lot to do with ‘note’ being so poorly defined; is a note a pitch, a dot on a page, a sound, a particular kind of tone… what? Most significantly the call made me think carefully about developing features of my work that I simply haven’t got round to scrutinising in any particularly useful way. What follows is, roughly speaking, the mental journey I’ve subsequently taken and, I hasten to add, not finished.


What is a musical idea? Is it:


What is musical notation? Is it:


In many senses they’re all of these things and, I’m sure, more besides. What strikes me most is how similar idea and notation seem to be.

I’ve heard the following question two or three times recently and in surprisingly different contexts (surprising given how subject-specific the question is): ‘when you come up with a musical idea do you imagine the way it’ll be notated or does that come later?’. The more I think about this question the more I’m convinced that ideas and notation are part of the same process, for me at least. Although admittedly that does depend on the kind of music I’m writing. That said, I distinctly remember visualising standard staff notation when coming up with thematic material for media music. Perhaps I’m just peculiar!

Certainly, though, when I’m coming up with more abstract, experimental ideas I’ve always got half my mind working on what those ideas will look like on the page – much more so than I do when dealing with more traditional musical forms. As any designer (of almost anything) will tell you the way something looks is hugely important because visual appearance influences the way users relate to… well, whatever it is – a score in this case. But it’s not just about visuals. I also think about how my ideas and their graphical organisation will function (again, designers will tell you how important function is). And that’s one of the hardest thing sto achieve: a proper sense of function in notation strongly related to the way it looks and ‘feels’. In essence, I’m always asking myself what a score and any one of its notational elements is for. And I don’t think I always get the balance right.

I don’t want to suggest I’m so utterly preoccupied with notation that I lose sight of my ideas; I very much see the notation aspect as secondary to the idea. But I can’t help myself from considering notation during the early stages of composition. I think this helps in a big way. If I approached the process the other way round I think I’d struggle a lot more; codifying a complex idea once it’s more or less complete is a daunting task. By developing the idea and the notation together the two can feed off each other, essentially becoming part of the same thing. And, to me, that’s important. Good notation should be all of the things I mentioned above: an expression, a liberating coming to life of an idea, a circumscription separating (at least partly) this idea from others, a part of the compositional process, a part of the interpretative process and, of course, a communication between composer and performer. It’s the point at which the idea gets shared, like passing on the baton in a relay race. The baton, of course, has to be fit for purpose.

So back to this call for works, which forms the backbone of the "One-note music" for pianist Juan María Solare project. How to deal with notation (note + ation) when the ‘note’ element has been singled out, reduced and potentially exploded? I find the prospect exciting! There are lots of pieces of music where a single note or a set of related notes (e.g. the harmonic series) forms the central feature. I thought instantly of Scelsi’s output (particularly Quattro Pezzi su una nota sola), Lucier’s Music on a Long Thin Wire, the general sound worlds of Luigi Nono and Charlemagne Palestine, Tenney’s Swell Pieces (perhaps most famously including Having Never Written a Note for Percussion) and a few others besides. Obviously I didn’t want to duplicate any of these styles or pieces, even if I do find them all captivating. What strikes me most about the American composers mentioned is where their music takes place – very much on/in the sounding bodies and not so much on the page. You could easily hear Scelsi’s music in your mind’s ear just by reading the score; Lucier, Palestine and Tenney have all written pieces that don’t make any sense until they’re experienced.

This brings me to another recent preoccupation of mine: actions (and sites of action). I’ll discuss this another time. But, in the present context, it made me think about the piano as a site and, as an extension of that, it made me think about the note as a site. This is perhaps easier to understand on the piano because every note has its own string(s). Singling out one pitch-note from the many available is therefore quite easy. To me, though, the pitch is not the important thing. I’m developing my ideas based on a limited site of action. In terms of piano-string classification this means one pitch (read: one note). But I want the piece to be performable on any freely vibrating string. This brings things right down to basics – the freely vibrating string being one of the fundamental examples in acoustics. It also brings me back to open instrumentation (and to Lucier’s Music on a Long Thin Wire I suppose!).

So what’s the idea? I want the performer’s hands to perform a kind of ballet on the string. I use the word ballet very deliberately because of its associations with actions rather than sound. Of course, ballets are accompanied by music (mostly). But the music comes first. I want the actions to come first and I want them to take place on a tightrope of a stage. From that comes sound. This isn’t about special effects inside a piano; again, this is a piece for any freely vibrating string. This is very much about actions as action and the balletic properties of our hands as they perform the tasks we set them.

So what about notation? Well, I’ve done away with the traditional stave, certainly. I’ll probably also do away with rhythmic notation and opt instead for rendering duration spatially. But what do I actually notate? The shape of the hands? The actual movement of fingers? I considered these options, but I think it’s more interesting to leave them up to the performer(s). Instead I’ll notate the points of contact with the string and the type of contact in each case – in other words: the sites of action. I’ve devised a basic scheme of symbols to use: 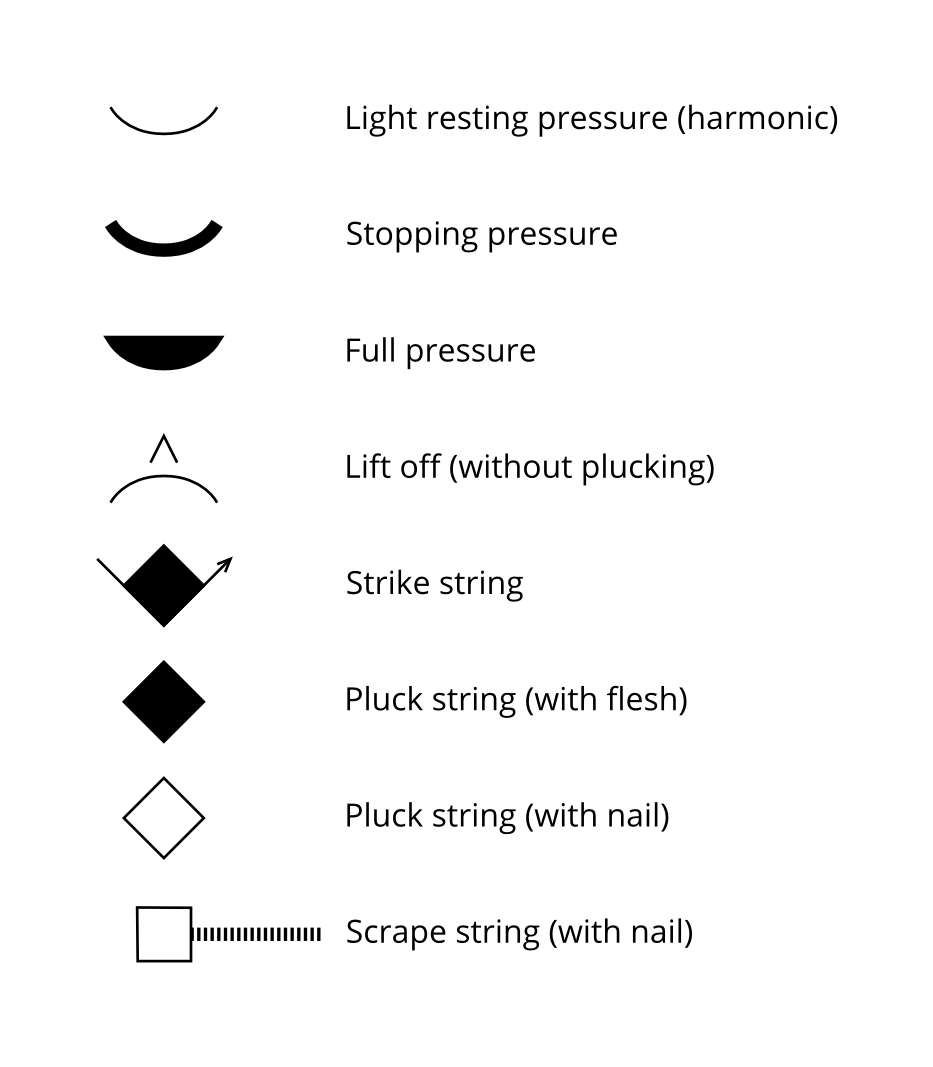 From these I want to create page-long gestures. I’ve no idea how many pages I’ll provide, but I definitely want each gesture to be separate. And we’re back to openness again: a major feature of the work will be its ‘open form’, to use the common(ish) phrase. But that’s a different story.